November is National American Indian Heritage Month and Legacy Stage joins in paying tribute to the rich ancestry and traditions of Indigenous Americans and to learn about Indigenous history of our own community. We acknowledge and are mindful that Legacy Stage creates and produces theatre in venues that stand on lands that were originally occupied by the first people of this area, the Mechoopda. Without them, we would not have access to the facilities and community resources we do today. Legacy Stage Board of Directors member Marquita Goodman sat down with local actor Nalani Geary, to discuss her experiences in the arts as a Native person and her hopes for the future.

Legacy Stage (Marquita):
Hi! Please introduce yourself and tell us about your tribe.

Nalani:
My name is Nalani Geary from El-Em Indian Colony. We are Southeastern Pomo. Our reservation is located in Clearlake, California.

Marquita:
What do you love most about being Native?

Nalani:
The food, Haha. I’ve been surrounded by such great food and abundance my whole life thanks to my family and I’ve always been thankful for that. But in all realness, I love the vibrant culture and traditions. I just recently danced for the first time in over 10 years and I thought that I had lost that part of myself, but she was just waiting for me. It was a very emotional and comforting experience to be welcomed back and I definitely won’t let it go another decade before I dance again. What we do is beautiful and connects us to the land, our people and the ancestors that paved the way for us.

Marquita:
How did you first get involved with theater and music?

Nalani:
I’d always been a quiet and shy kid, but one day my elementary school put on a singing competition and I convinced a couple of my friends to do it with me. We did a little Destiny’s Child number and I think everyone who knew me didn’t expect shy little Nalani to perform as well as I did. From that moment I was hooked. I took drama in middle school and my teacher convinced me to audition for my first musical. Since then I’ve been involved in performing arts any time I could. I was in show choir, I won a couple singing competitions in high school,  I did a charity show when I worked at Disneyland and I really hit my stride here in Chico.

Marquita:
Have you faced any difficulty in the arts due to being Native?

Nalani:
I definitely think I have. When it comes to theater, if you’re a person of color you’re usually tucked away until they’re doing a show like West Side Story or Hairspray where they need you to be highlighted. It never really feels like you’re considered for the protagonist, especially for bigger women of color. I usually feel resigned to matronly or villainous parts, which can be amazing and fun to play, but when they’re the only parts you feel like you can get, you start to wonder about what that says about you and your body image.

It’s also difficult being from such a small, underrepresented group. While people say I may look “ethnically ambiguous” I often feel weird about any role I play. There are an incredibly small number of roles for indigenous people, especially on the stage. No matter what part I play, I think about how I might be judged for not being the correct race. Even though, technically I am part white, I’m too dark to play white characters and I’m not black or Latina. All shows that I connect with as a person of color will never fully connect to me as an indigenous actress.

Marquita:
What role did/do the arts play within the culture of your tribe?

Nalani:
It’s funny, because growing up doing tribal dances, I now connect it a lot with performing. The dressing room banter, the community you feel with the people you’re dancing or performing with. It’s an amazing sense of togetherness in both places. When I dance, people see me telling the story of my culture, family and traditions. When I perform in theatre, I’m telling stories of shared human experiences. Whether the song ends in an “Oh!” or an applause I always feel proud to be where I am.

Marquita:
What is your favorite thing about the arts?

Nalani:
I think my favorite thing about the arts are the people that do it. I have met so many great people and I am so lucky to have become incredibly close with these individuals who have the same goals. Theater people are friendly, endlessly talented and always down to have the best time. Even if I have issues with society and it’s role it has in theater, I always find comfort in the people next to me onstage.

Marquita:
How would you like to see the arts changed, if at all?

Nalani:
I would love to see more indigenous people get involved in theater! It’s such a great outlet and the more we participate, the bigger impression we can have on the arts. We can create new content, make our stories heard, and give other Native people a chance to shine!

Excerpt from the Chico Enterprise Record (article by Verda Mackay)

After months of going through the problems of the COVID virus, lovers of live theater, young and older, are happy to welcome the opening of performances.

“All Together Now!”, a global event celebrating local theater is a musical revue with songs from Broadway’s biggest hits and classic shows. Among the featured songs are hits from “Mamma Mia!,” “Sister Act,” “Mary Poppins,” “Waitress,” “Rent,” “Fiddler on the Roof” and many more. Many favorite local performers will perform.

Music Theatre International, located in New York, is providing schools and theaters around the globe with this exclusive musical revue to be used as a fundraiser for the local theaters which are persevering under trying circumstances.

This festive musical theater event gives local theater companies the opportunity to join in a performance to celebrate the place and feeling that is live theater.

Excerpt from the Chico News & Review (article by Jason Cassidy)

Erin Horst’s mother still has the notebooks that her daughter filled with theater designs.

“I’ve been sketching out a theater company since I was a little kid,” said Horst, now a mother of two. “I was very convicted from an early age that this is what I’m doing with my life.”

Hand to God and The Madam and the Mayor’s Wife at the Blue Room; Slow Theatre’s Vincent at Chico Women’s Club and the Butcher Shop festival; California Regional Theatre’s Matilda and Sweeney Todd at CUSD Center for the Arts; and most impressive of all, Legacy Stage’s exhilarating outdoor production of Macbeth in Bidwell Park.

Roving outdoor version of Macbeth is ‘a revelation’

All the world’s a stage, indeed. It certainly is for Chico’s newest theater troupe. Legacy Stage takes advantage of multiple natural sets throughout Lower Bidwell Park for its debut production, a mobile version of Shakespeare’s Macbeth. And the opening-night performance last Thursday (Oct. 3) was nothing short of a revelation—one of the most gratifying theatrical experiences I’ve had in Chico.

It’s been more than a decade since Shakespeare in the Park was held in Lower Bidwell Park’s tree-lined Cedar Grove. And as the audience stood in that meadow in the dark during his introduction to the night’s experience, director Matthew Teague-Miller spoke fondly of what was once a crucial component of Chico’s arts identity, while also promising that this return to the park was going to be something completely different…

Read full article below or by visiting the Chico News & Review website. 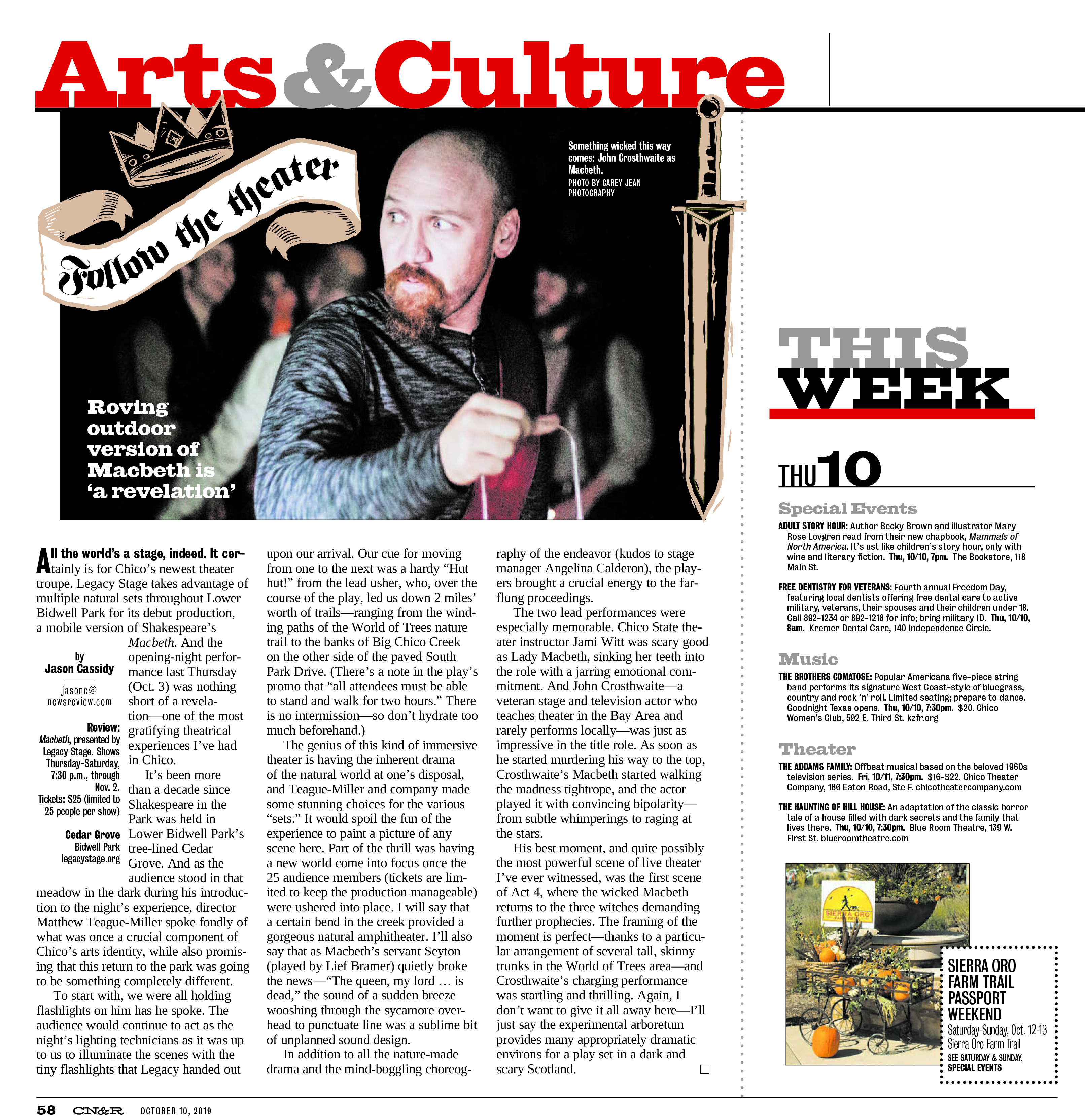 Excerpt from The Orion

The Legacy Stage theater group has created a unique twist on Shakespeare’s “Macbeth”. For this performance, they’ve dropped all the qualities of traditional theater. This means no stage, no seats and a two-mile walk around Bidwell Park at night.

For a performance this unique, audiences should be prepared to experience Shakespeare as they’ve never seen before….

A new theater group has plans to start up in Chico next fall, and it will hit the boards with a bold opening statement. The debut production of Legacy Stage will be an outdoor showing of Macbeth in Bidwell Park’s Cedar Grove. Not only is the troupe tackling Shakespeare’s great tragedy, but it’ll be presenting it a dozen times throughout the month of October (Oct. 3-Nov. 3).

Legacy is being launched by a group of local theater folks who decided to pool their resources to collaborate on projects, according to co-founder Erin Horst, who teaches theater at Inspire School of Arts & Sciences and Chico State. Horst’s co-conspirators are actress and Chico State Theater lecturer Jami Witt and local actress/director Lara Tenckhoff…